an orchid blossom detaches itself from the stem
and floats…
… gently…

down… drift… down…
to the floor
resting in silence
forever

a magical moment to remember
but, like the blossom
memory too will fade
gently
down… drift… down

beauty
so fragile
tomorrow
will be forgotten

Another entry from my journals…….

MESSAGES FROM THE FUTURE #19

The invisible net
cast over me.
Weighted to hold me down.
Resistence to slow me down,
pressing in on me,
flattening me,
doing its very best to squeeze
and crush the breath out of me.

Having tried to think of God
as freedom, boundless, expansive
Creator of endless possibilities ………

What if God is merely the cage?
The trap, or pen, to corral all that IS free.
A reaction to regret.
Regret of even imagined freedom.

Maybe Atheism is the cure for God!
The destruction of gravity’s cage.
The release of the spirit; free-flying bird.
The soaring on eagles wings.
Seeing, comprehending, knowing
beyond words.

The perfection of silence –
The unspoken truth of all things.
Silence: all that ever was, is and will be.
That perfection that comes immediately after
the last sizzle of water extinguishing flame.
The beauty of darkness and quiet.

Silence has no gravity.

******* About the artwork: Messages From the Future #19 (created 2013) is a digital, photo-based creation intending to question the spoken and written word. It highlights the paradoxical viewpoint of language as both lie and life simultaneously. A self-negating notion. “Silence is golden.”

I am not a poet

A man who finds it difficult to live and express himself in the realm of the obvious.

I am not a poet

A man who struggles

emanations spread out in time and space

Surrealism used to be interesting
Now it just bores me.

Have you noticed how almost all of the imaging we encounter on a regular basis features some surreal aspect?
Cinema, advertising, photography, literature, art – In photography, with photo manipulation, it’s everywhere.

It’s as if surrealism is the new reality.  Everyone’s doing it.
And that’s just boring. There’s nothing special about it anymore.
It’s doesn’t shock, surprise or cause people to think – any more.

Surrealism used to be interesting
Now it just bores me.

Has anyone else noticed how we’ve become a culture of scanners?
People don’t comprehend what they read anymore.
It’s as if they cherry-pick a few words of text and jump to conclusions – almost always wrong.
No matter how clear the text may be,
no matter how spelled-out it is in black and white
their interpretation and conclusion is wrong.

I’ve witnessed this more and more mostly at work but it’s also been happening in my daily interactions where written text is involved.

At work (and home) I’ll send emails and get serious reply’s that have nothing to do with what I had emailed. And I have to re-send the email and highlight the words they skipped. They will then email back saying, “why did you send this to me again” – and my response is “because you didn’t answer my question”. They they respond, “Oh, I see now…” So much time is wasted when people just read the subject line or scan the content without taking the time to read and comprehend what was written.

Naturally, some questions come to mind:
What are the consequences of this?
How much longer will it take to get things done?
How many mistakes will be made?
Has technology made it possible for things to move too fast?
Has technology made comprehension impossible?
Has technology made idiots of humanity?
Is it necessary to dumb-down the written word to a brief “texting” and “tweeting” format?
At what point will communication have nothing to do with the word?
At what point will communication be just a series of gestures and expressions?
At what point will humanity become digital grunting cave-men/cave-women?
Even if things are reduced to pictograms – will that help?
Will all books in the future be solely image-based with no text (not for reasons of censorship and control – as in Fahrenheit 451 – written by Ray Bradbury – but…) out of an inability/unwillingness to read?
Will written content just be fuel for fire?

I’m happy to say that most of my friends who are avid readers have not yet fallen prey to this disease. But I am seeing it spread (unfortunately).

Treatment for this disease:
Time. Taking time to read, comprehend, think about – then respond/act.
Stop & Read.

A fun song from 1991 by indie band Mega City Four off their album Sebastopol Rd.
In this case use the word “listen” as a metaphor for “read” and this song will be equally applicable.
Accurate comprehension depends on taking the time to STOP and read. Some of you will undoubtedly just jump to the video without reading this post.

I’ve been thinking lately about thinning out my music collection (now several thousand CDs strong).  I’ve been thinking about what I want to keep and what would I consider a master work.   I’m going to introduce you today to a recording that fits the description of Masterwork for me.    I bought this recording on a whim.  I had never heard of this artist before and came upon his music by chance.  I liked the cover art.   The name of the artist was intriguing because it didn’t seem to fit the category of jazz that it had been saddled with and it also didn’t fit the record label it was recorded on.   The description which was so general as if the writer wasn’t even sure how to categorize this music made me want to investigate this music.  While each track has it’s own title – I will not be singling out song titles in this review because one needs to look at them as a series of movements in the larger work.   To focus on titles would do a disservice to the overall recording. 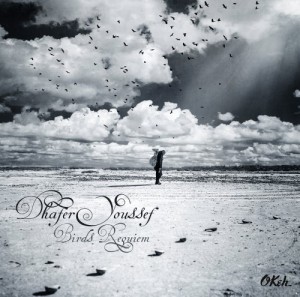 What is that recording?  BIRDS REQUIEM by Dhafer Youssef on Okeh Records.  Released in 2013.

Dhafer Youssef is an Oud player, vocalist and composer. His music is probably the most perfect fusion between jazz, muezzin, quranic and sufi musical styles and influences.  The EPK (electronic press kit) that was released for this album had Youssef talk about his experience with observing birds in flight.  For example, how a flock of birds hovering in their aerial ballet have a perfect ebb/flow, rhythm and pulse like a murmuration of starlings. The overall rhythm and pace of the album is expertly crafted with energetic and quiet points that are perfectly timed.  In fact listening to the entire album in one sitting is an audio equivalent of a massive murmuration.

While listening I find myself at times quietly inspired then lifted up in elation to the point of ecstatic release. The instrumentation is an absolutely wonderful surprise.   A real delightful feature is Youssef’s imaginative yet sensitive playing of the OUD (for those not familiar with this instrument: one might call it an anscestor of the lute and then later, guitar).  Piano playing by Kristjan Randalu lilts through the entire album adding snippets of melody.  I was surprised at the masterful contributions by trumpeter Nils-Petter Molvaer and electric guitar and effects man Elvind Aarset (both on the ECM label).  The drummer Chander Sardjoe is a study in both minimalist accents and a strong backbone of support.  The delightful contributions by Aytac Dogan on the zither-like kanun add such beautiful dressing on this feast for the ears.  And not to be left out is the surprising use of clarinet, which I have never, NEVER heard used this way.  The Clarinet is played by  Hüsnu Senlendirici who plays with soul and adds a sense of life that would be sadly missing if it were absent.  The musical cast is rounded out by the Bass playing of Phil Donkin which adds the appropriate bounce and lift.  I would be completely incompetent if I didn’t mention the voice of Dhafer Youssef which starts low and builds; rising in registers.  His voice (singing in arabic) starts mixing tones on overtones and is at times hard to distinguish between voice/clarinet/guitar ending in a climax, a musical grand release, a staggering work of stunning beauty.

In a world that is constantly on the move where music is more of a background soundtrack to the journey – this album definitely sets itself apart by becoming a destination.   A place to stop,close your eyes, be quiet, listen and feel.  I would strongly encourage you to purchase the downloads or (if you’re like me) the CD.   It is one of those things that while purchased actually becomes priceless.  A Masterwork in its own right.

Here is a video of a live performance of track 3 from the album titled Blending Souls & Shades (to Shiraz) the instrumental lineup is different (sans trumpet and clarinet) from the album but the song is still quite powerful.  Enjoy.

And Lastly, Here is another video of the track Soupier Eternal (from the DIVINE SHADOWS album) filmed in Tunisia. This trio format will give you some idea of the Clarinet/voice/guitar interplay that can frequently be heard on the album and how these three “voices” are a perfect complement to each other on both recordings.

I’ve been reading  SEEDTIME, writings from the notebooks of Swiss poet Phillipe Jaccotet. His writings about the swiss countryside bring back so many memories. Memories of growing up on the farm near Kidron, OH (USA) So here are some thoughts of my own:

My Grandfather used to make trips to Switzerland our ancestral homeland and in 1948 he had a set of cowbells made that covered at least two octaves on the western musical scale. Here is an image of one of our family’s cowbells that I’ve been able to salvage. Not sure what happened to the rest. Bells were cast in Bronze, included the family name (Geiser), date (1948), image of a cow and decorative Edelweiss flowers, the text “Made in Switzerland” and name of the foundry where bell was cast (Barinotto Co. Fonderie La Chaux De Fonds) 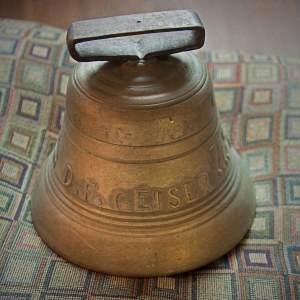 And what do cowbells sound like? What sound became so familiar to me during summer?
(fyi – there is a 20 second gap in sound near the beginning).

Like Loading...
From one of my favorite indie bands that I got into during my college years.  The one and only Mojo Nixon & Skid Roper with their washboard psychobilly rock and roll. Dedicated to the country of Greece who is probably feeling this way with the way the EU is jerking them around.

and anticipatin’ the upcoming July 4th Holiday.  Here in crazee America – home of UFO’s, Big Rigs, and BBQ
So who the hell is Mojo Nixon? Find out more here:
http://www.mojonixon.com
https://en.wikipedia.org/wiki/Mojo_Nixon